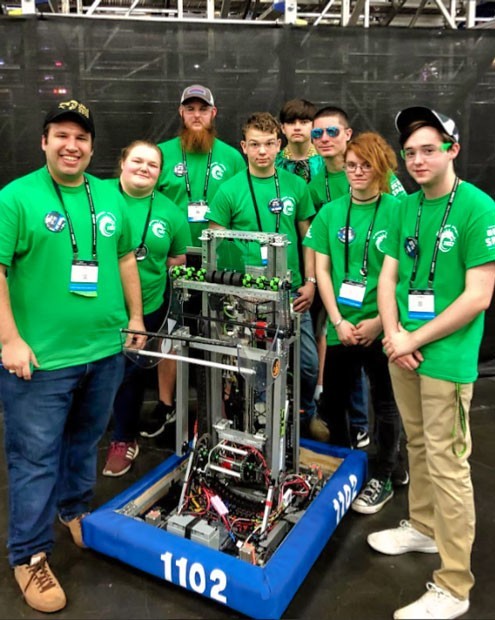 Paul Rodi, left, and members of the M’Aiken Magic robotics team. They finished earlier this month as 8th seed alliance captains in the Galileo division of the World Championships for FIRST Robotics Competition in Houston – their best ever performance.
Share this story

April is National Volunteer Month, when we celebrate the work of volunteers in our communities.  For Senior Engineer Paul Rodi, Initial Test Program, Vogtle 3&4, robotics has been a way of life since he was in the sixth grade. He credits his participation in a robotics team for helping him earn college scholarships, valuable skills and a job in engineering upon graduation.

And now he is working to pass that valuable set of skills and experiences on to a new generation of Georgia students. He serves as a mentor for two different high school teams, which is a significant time commitment, but one he is willing make because of the benefits for those who participate. The program is FIRST (For Inspiration & Recognition of Science & Technology) Robotics Competition. Teams are given a kit on kickoff day in January, and they have only six weeks to design, build and program a robot that will accomplish a designated set of tasks. At the competition, the robots – which measure about four feet tall – are put through their paces, with students using remote control devices to direct them.

Winning teams can work their way up to district, regional and eventually a national competition.

Rodi said most team members who get deeply involved in the robotics team go into engineering, and he enjoys helping them expand their experiences.  “I try to put them in different roles so they can get comfortable with new things,” he said. “Kids who are only good at coding need to learn to explain their design to the judges. That part of the competition is like a job interview, and they need to get comfortable with that. It helps build character.” One of the schools he works with has had a robotics team for several years, so he lets the students do most of the work. The other team, which is participating for the first time this year, requires more of his help. “They have a lot to learn, so I’m more involved. I still let the kids do everything, but I help them by teaching design. I’m not going to let them fail,” he said. He spends a significant amount of time with the students, estimating about 300 hours in the six- to seven-week competition season, but he maintains it’s worth it for him as well as the students. One of his teams won the state competition last year and went on to compete in the world championship. This year, the rookie team earned a spot in the regional competition by winning a district championship. He would like to see more of his colleagues get involved in mentoring teams in the area. “It’s a hard sell,” he admits, “because it’s such a huge time commitment. But I enjoy the kids, and I can see the results.” Several students he has mentored have gone on to major in engineering at Clemson, Georgia Tech and other universities.  In the off season, the teams attend community events and put their robot on display, even allowing other students to drive it. “You can talk about robots to kids and they are somewhat interested,” Rodi said. “But you let a kid drive a robot, and they want to be part of the team.” Rodi knows how much his interest in robotics has meant to him and his career, and he appreciates the adults who gave of their time on his behalf. He is determined to pay the gift forward for some of today’s future engineers. Editor’s note: To really gain an appreciation for what the robots can do, watch this video of the M’Aiken Magic robot – in blue, #1102 – competing in a district event in Gainesville, Ga.