March is Women’s History Month. We’re spotlighting Jamie Coleman, assistant to the Regulatory Affairs vice president. She’s one of SNC’s female leaders who is paving the way for other women.

When and why did you become interested in nuclear energy?

I didn’t know much about nuclear power until I interviewed for a job in 2003 at Plant Farley. Everyone I talked with was so passionate about nuclear energy and how it was clean, safe, reliable and affordable. I left Plant Farley that day with the impression that nuclear power was the future and answer to our country’s energy needs and I wanted to be a part of it!

Did anyone mentor or encourage you along the way? What did that person do for you or what advice did he or she give you?

I have had many people mentor and encourage me during the 15 years I’ve worked for Southern Nuclear. Some of the best advice I’ve received is to always say yes to opportunities that are outside of your comfort zone. I’ve had many opportunities over the years to speak in front of large groups of people, give presentations to leadership, and lead training. I never want to turn down an opportunity for growth.

What’s it like to be a woman in a predominantly male field?

It is the only point of view I have, so it’s hard to say how it’s different, but in my opinion it is a positive thing. I know that I bring a different perspective and different opinions to every team that I am a part of. Being diverse adds value and I’m happy to be able to do that.  I have never felt like I’ve been given an advantage over my peers or had a disadvantage because I am a woman.

I understand you hold a license. Were there any other women in your licensing class? What was it like working as an operator?

We started out with 16 people in my license class, I believe, but I was the only woman. Being in Operations was one of the best jobs I’ve had at SNC. The opportunities and knowledge gained during my time in Operations has been invaluable. I think women, in particular, worry about the commitment of license class and shift work when there are competing personal priorities.  I wish I had attended license class earlier in my career than I did so that I could have had more time on-shift before starting my family, but I am so glad I did make it a priority and know that I have benefited from that decision.

What does it take to succeed in the nuclear industry?

Working in the nuclear industry requires hard work, dedication, patience, attention to detail, a constant pursuit of growth and excellence, and a lot more.  Personally, I’ve had a great support system at home and at work, which has allowed me to make the most of my time.

Have you encountered any obstacles?

My biggest obstacle, which is probably the same with many others, is trying to have it all...I want a happy, healthy family and a fulfilling career. It hasn’t always been easy. My husband and I both work and we had three children in less than four years. Work travel, overtime, and advancement were limited for me for a while…by choice. It has taken a while to figure out what works for me.

Do you have a funny anecdote about being a woman in a predominantly male field?

I always joke about how, especially early in my career, when I would go to an industry meeting, it wasn’t uncommon that I was the only female and person younger than 40 years old in a meeting, and no one wanted to sit by me! I think it takes a brave person to be the first to say hello to someone new, but especially when it doesn’t appear on the surface that you have much in common with that person. Now, in most circumstances, there is more diversity in both gender and age. But very recently I did attend a dinner where I was the only female and there were 10 men. I got served wine, dinner and dessert first, so that was nice. :)

What advice do you have for other women who want to follow in your footsteps? 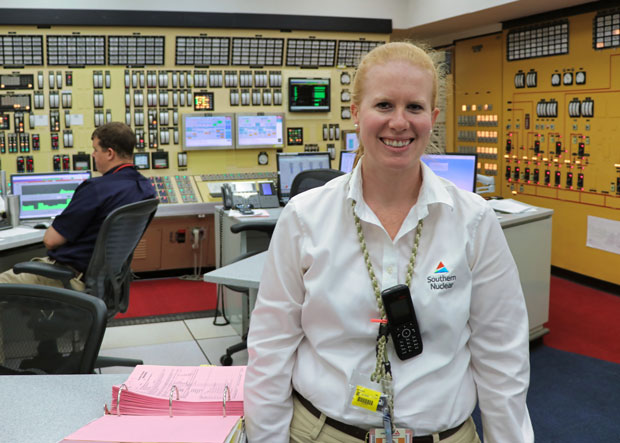 Kristi Nichols: ‘It is an honor to be the first’
Our People

We celebrate our Nuclear Professionals