Water: Precious for life and important for generating electricity

Water, something vital to all known forms of life, makes up approximately 70% of Earth’s surface and roughly 60% of adult human bodies. Water also plays a prominent role in generating large amounts of electricity, which is now considered essential for nearly all aspects of our lives. Let’s look at how water helps power our world.

Nuclear-powered electric generating facilities are typically built near rivers, lakes or oceans, and many also use groundwater. At nuclear energy facilities such as Plant Vogtle, a closed system of water is heated by splitting uranium atoms (called nuclear fission) as it is pumped through the reactor vessel.

This primary system (the red loop in the above animation) transfers heat to a separate secondary system of water where steam is created, and that steam spins the turbines that are connected to a generator, which creates electricity. At Plant Vogtle, which is a pressurized water reactor, the water used in these two closed systems is withdrawn from deep, on-site wells and is constantly being reused.

A third system, which pulls water from the Savannah River, is used to cool and condense the water from the secondary system, and this water leaves the plant through the cooling tower as clean water vapor. This means that the water vapor that is visible above the cooling towers – the clouds – is essentially leftover heat from generating electricity!

Water is an excellent material for cooling since it takes the largest amount of energy of any substance to transform from a liquid to a gas (latent heat of vaporization). This allows for efficient and effective transfer of heat between the systems and to the atmosphere.

Water is a near-ideal coolant

When compared to other liquids, water has one of the highest specific heat capacities (amount of energy required to change the temperature by 1 degree Celsius), allowing it to transfer a significant amount of heat and serve as an effective coolant. Water in nuclear energy facilities is also used to ensure nuclear safety by cooling the fuel in the reactor and within the used fuel pools.

Water also serves as an effective radiation shield, which is important to the safety of the facility’s workforce. For example, during scheduled refueling times, used fuel assemblies are transferred under water to make sure the fuel remains cool and that radiation is effectively shielded.

In light water reactors (roughly 75% of the world’s reactors), water is also used to moderate the nuclear fission process that occurs inside the reactor.

Water allows for fission to take place by slowing down the neutrons released from splitting uranium atoms so that they can split additional uranium atoms, which then releases more neutrons to create a controlled nuclear chain reaction. Without water, those neutrons will travel too fast, flying right past the uranium atoms, and a sustained chain reaction wouldn’t be maintained. It’s this splitting of atoms that creates the heat used to generate electricity.

It’s all about the steam

Water expands up to 1,700 times its volume when it transitions from a liquid to a gas, which means that steam can be increased to great pressure to spin huge turbine-generators when it is constrained inside large pipes. When steam is condensed back to a liquid, releasing heat, it contracts by a similar amount, creating a powerful vacuum effect. This is why steam has been important to humans for so many years and why nuclear facilities such as Plant Vogtle are more efficient, generating more electricity, during the cooler months of winter. 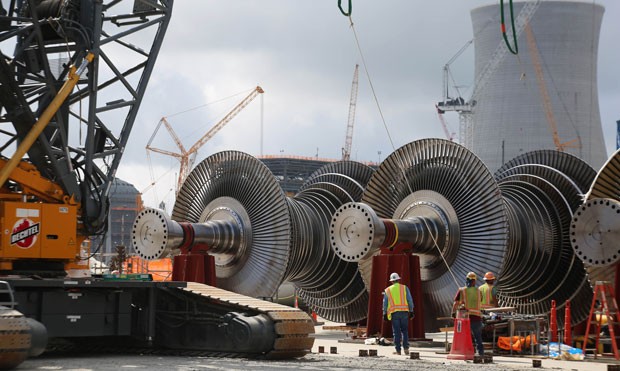 Large low-pressure turbine rotors prior to being placed into Vogtle Unit 3 in 2019. Pressurized steam will spin these rotors, connected to an electric generator rotor, at 1,800 revolutions per minute (RPM).

Large low-pressure turbine rotors prior to being placed into Vogtle Unit 3 in 2019. Pressurized steam will spin these rotors, connected to an electric generator rotor, at 1,800 revolutions per minute (RPM).

No doubt, water is an amazing substance. And its importance in generating electricity is also amazing!

In this photograph taken recently from an airplane, the Vogtle 1 & 2 cooling towers (left) and the newly built Vogtle 3 & 4 cooling towers are shown rising above a thick blanket of low hanging clouds. This fog formed, because at that moment, there was plenty of humidity in the air, a lot of moisture on the ground and of course the nearby Savannah River, which are all made up of … water! 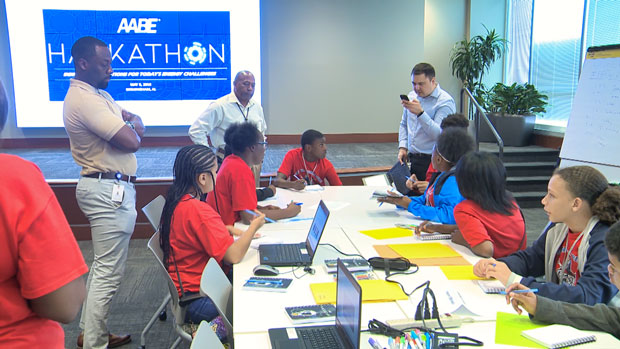 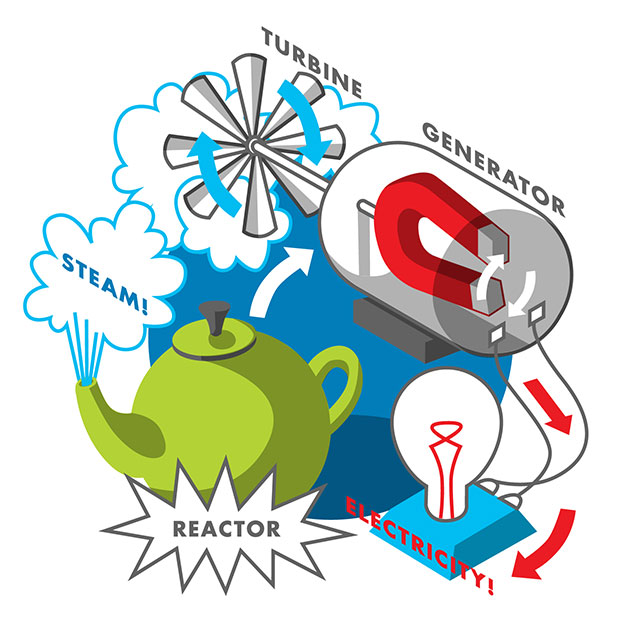 The process of generating nuclear energy